Every day, business and political leaders are tackling the question of how to revive downtown Minneapolis.  After a year of dealing with the pandemic, social unrest, and shuttered businesses, they are searching for ways to bring people back downtown.  Even as the state has ramped up vaccinations against COVID-19, downtown remains a ghost town with few office workers, limited events, and restaurants and bars scrambling to attract customers.

The question of how to revive downtown Minneapolis was recently posed to a group of real estate leaders on a panel organized by Bisnow.  The panel acknowledged real challenges facing the city, however, at the same time they found bright spots on the horizon as people are ready to leave their homes in pursuit of a bit of normalcy, illusive as that may seem. 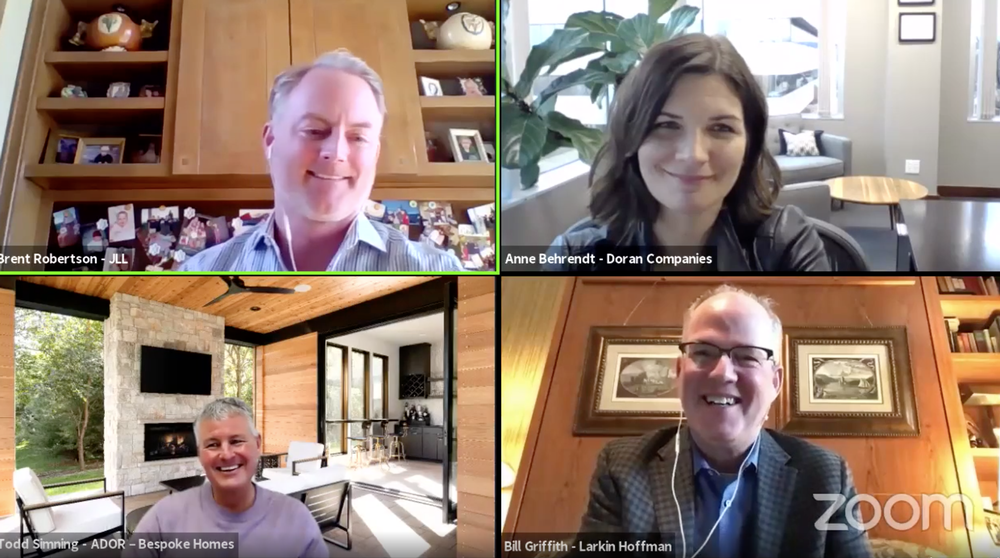 Brent Robertson is the market lead for JLL’s office in Minneapolis.  He’s working on several large commercial real estate projects in and around downtown.  One of his clients is a large law firm tenant that was planning to move in two years and has announced they will remain downtown.  “I wouldn’t say the pandemic had an effect, but it just speaks volumes to their commitment to downtown Minneapolis.”

Anne Behrendt is CEO of Doran Companies, a local developer of multifamily and commercial projects. Her company responded to pandemic protocols by getting construction managers on-site more often.  “That was in the works but probably happened much quicker than we thought as a result of the pandemic.”  She also emphasized the focus on social issues that have come with the events of the last year.  “We are having really thoughtful conversations about equity, inclusion, and anti-racism within our organization and within our community and how do we drive that in our businesses and within our spheres of influence?”

Todd Simning is President of ADOR Homes, a builder of custom homes and unique multifamily projects.  He noted that the pandemic has created opportunities for new business.  “In single-family construction, there was a big push towards people wanting home offices.  There’s still quite an appetite for people to live in multifamily apartment and condo buildings, with safety precautions.”

Many predicted a mass exodus to single-family and suburban locations a year ago.  The panel reported that things have slowed, but the mass exodus has not materialized either as a result of recent social unrest or the pandemic.  In fact, Simning reported losing a development property to other bidders in downtown just a month ago.

“This shows that people still want to invest in Minneapolis,” said Simning.  “I took that as a real positive.  The other thing that I’ve noticed hanging around the North loop area is there still is a lot of activity around there, whether you’re at Fairgrounds Coffee, or Martin Patrick, you see that.  The Hewing Hotel is also starting to pick back up.”

According to Behrendt, the multifamily market is mostly holding its own. “There are projects in lease-up right now that are doing fine, but when you look at the sub-markets within the downtown area, performance has been spotty.”  “Looking forward”, Behrendt said, “as we come out of this pandemic, you’re starting to see activity continue to increase. That’s a positive but I also think, given the term of most of these leases, we’re probably 12 to 18 months out from really understanding fully what kind of impact 2020 had on the downtown leasing market.”

On the investment side of things, the pandemic has slowed investment activity downtown.  According to Robertson there were only two notable transactions in 2020, “the Thrivent Headquarters trade and the Millwright Building.” Still, Robertson believes buyers are committed to downtown Minneapolis.

Simning, an investor in downtown, echoed that sentiment, “I truly believe that as the vaccine gets out a bit more, people are going to go back to the mean.  They want to socialize, they want to hang out, they’re tired of being pigeonholed at home.”

One wildcard in the downtown office market is the recent announcement that Target plans to vacate City Center, giving employees the flexibility to work from home or at its campus in Brooklyn Park.  “That was an unfortunate announcement and the timing of it is tough,” said Behrendt. “We’re all trying to get some momentum, but Target was moving employees up to their Brooklyn park campus prior to the pandemic.”  On the bright side, Behrendt noted the recent announcement that the Dayton’s project leased a significant block of space, “which will continue to drive momentum downtown.”

Robertson responded to the news about Target saying, “They have ten and a half years left on that lease at City Center and I continue to say, this is the first couple of pages of the first chapter, of what’s going to be a long book.  If it works, they’ll lean into it more and if it doesn’t, they’ll pivot.”  At the same time, Robertson noted that other national companies like Google and Amazon continue to add employees and space driving real estate transactions.

Another challenge brought on by the pandemic is a disruption in the supply chain for building materials, fixtures and appliances.  Behrendt said she’s helping clients get out ahead of it by ordering things early or swapping out brands.  “Some are just practical decisions that people have to make, but the bigger issues for us, and for everyone building wood construction right now, are lumber prices and steel prices.  Material prices are really volatile.”

Simning said he knows owners of lumber mills in northern Wisconsin and offered this insight.  “There’s plenty of logs at the mills – the issue is getting it milled into two by fours and two by sixes, whatever we need as dimensional lumber and getting it to the distributor.”  He believes the bottleneck will start to clear in the third and fourth quarter of the year as more people return to work and COVID protocols are gradually eased.

All three panelists agreed that employees should be offered flexibility on whether to get vaccinated before returning to work.  Behrendt said, “Number one, having people get vaccinated and being efficient about this process is so key to where we need to go. We are actually planning a big party since we didn’t have a holiday party last year and the idea is if you are going to come to the party, you need to be vaccinated.”  Behrendt added, “As employers, we can strongly encourage people to take those necessary steps, but we are not going to mandate it as a company.”

Robertson has been working downtown since his office reopened last summer.  “With proper protocols in place, we’ve had zero transmissions.  I’m not going to require anyone to come back if they don’t feel comfortable with coming back, but I’m just sensing that people want to get back.”  He added, “I’m just going to be smart about it, I’m not going to be pushy about it.”

Simning said his construction crews don’t take for granted the fact that they have been able to work on job sites all year during the pandemic.  “The biggest thing that I’ve stressed through last summer and even this year is whatever we need to do to stay open, I think it’s our obligation to actually do the right things.”

Shifting gears, I asked the panelists to look ahead five years.  Behrendt is hopeful, “When we look at Minneapolis and downtown in particular, I think we are going to be back to where we were.  We’ll continue to see multifamily activity, it may be smaller projects and infill type projects versus some of the larger-scale deals that we’ve seen in the last few years.”  She concluded, “I think the five-year picture is bright, but I think our challenges are going to be construction costs and interest rates, something that everybody’s watching, and just how these deals get put together may shift a bit.”

Robertson hopes to see more companies choosing to relocate a division to the area. “We’ve seen a little bit of it, I’d love to see more of it. With flexible work, I think we are going to see more of it in cities like Minneapolis and St. Paul, where the cost of living is much lower than the Bay Area or Seattle. He added, “We have a diverse economy, all the things that Greater MSP is promoting, so I’m hoping in five years, we have more success on that front.”

Simning says he’s an optimist at heart and talks about other downturns in which investors found real estate a good investment. “We started buying development land in 2011 on the residential side and the reason I did is just knowing people always seem to go back to the norm.”  As in the past, Simning sees optimism returning, “I think people want to get out again.”

No one will dispute that the last year has been difficult for all of us, and it’s easy to get mired in all the bad news.  It was great to spend a few minutes with some hard-working, seasoned real estate professionals who see a brighter future, not only in downtown Minneapolis, but across the region and beyond.