Larkin Hoffman held its annual women's networking event on Oct 29, 2014 at MUSE Event Center in Minneapolis. This year's event, "Connecting Women Through Art," featured an evening of networking and interactive art demonstrations and exhibits. Guests immersed themselves in art created by some of the most talented female artists in the Twin Cities while mingling with other leaders and business professionals. Guests had the opportunity to purchase artwork, and a portion of the proceeds benefited this year’s nonprofit partner, Breaking Free. Breaking Free serves women and girls involved in systems of abuse, prostitution, and trafficking.

Below is an article from Minnesota Lawyer which offers additional highlights from the evening. 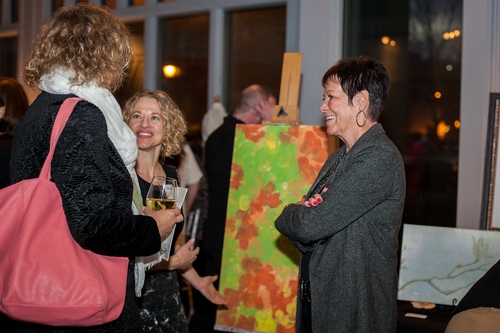 by Minnesota Lawyer Staff
Larkin Hoffman, which counts itself as a pioneer in the area of bringing business and professional women together, held its annual event recently at Muse Event Center in Minneapolis. The event was started by attorney Dayle Nolan as a way to get women together, at a time when she’d often be the only woman in a courtroom or a boardroom. “The conversation among women is just so easy,” Nolan told Bar Buzz.
About 200 guests attended the party Oct. 29 that was also a benefit for the Breaking Free organization, which assists survivors of sex trafficking. The women from Breaking Free sold their handiwork and Nolan said she was gratified to see the guests congregating around their tables.

Also, 10 local women artists demonstrated their talents and sold their wares. The artists represented the women who passed muster with Nolan as enthusiastic supporters of the mission of the evening. The firm gave away gift bags that were purchased from Breaking Free and the artists donated 10 percent of their sales to the organization. The firm also bought artwork and awarded it as door prizes. And perhaps the best donation to Breaking Free was the long-term exposure it gained from the evening.