On January 16, 2017, Larkin Hoffman partnered with Second Harvest Heartland, for the third consecutive year, in an effort to help feed hungry families in the upper Midwest. Employees of the firm and ‎members of their families spent Martin Luther King Jr. Day sorting and packing food at the organization’s Golden Valley warehouse.

“We are proud to continue our partnership with Second Harvest Heartland,” said Glenna Gilbert, chair of the firm’s Diversity Committee. “Dr. King actively fought to end hunger and poverty and we’re grateful that we’re able to honor his legacy by continuing his fight.”

During the afternoon, 25 volunteers from the firm packed 3,840 pounds of food. The food was then distributed to stock local food shelves that feed children, working adults and seniors who don’t have enough to eat. In addition, several of the firm’s employees made financial donations to Second Harvest Heartland.

Larkin Hoffman is proud to congratulate two of its law clerks who were recently recognized for their international humanitarian work, local community leadership and academic accomplishments.

Victoria Dutcher, a student at the Mitchell Hamline School of Law, was awarded a Benjamin B. Ferencz Fellowship in Human Rights and Law by the human rights organization, World Without Genocide. Victoria’s work focuses on monitoring persecuted religious groups in Burma and developing outreach to human rights groups operating in that country. This is the second year Victoria has been honored with the fellowship.

Muna Omar, a student at the University of St. Thomas School of Law, was awarded the Judge Michael Davis Scholarship by the Minnesota Association of Black Lawyers, a bar association for minority attorneys in Minnesota. Muna was awarded the scholarship for her work in the community and academic achievement, as well as for demonstrating how her work advances the mission of the Minnesota Association of Black Lawyers.

“We are proud of the achievements and recognition of both award recipients and delighted to be associated with these remarkable law students,” Bill Griffith, president of Larkin Hoffman said. 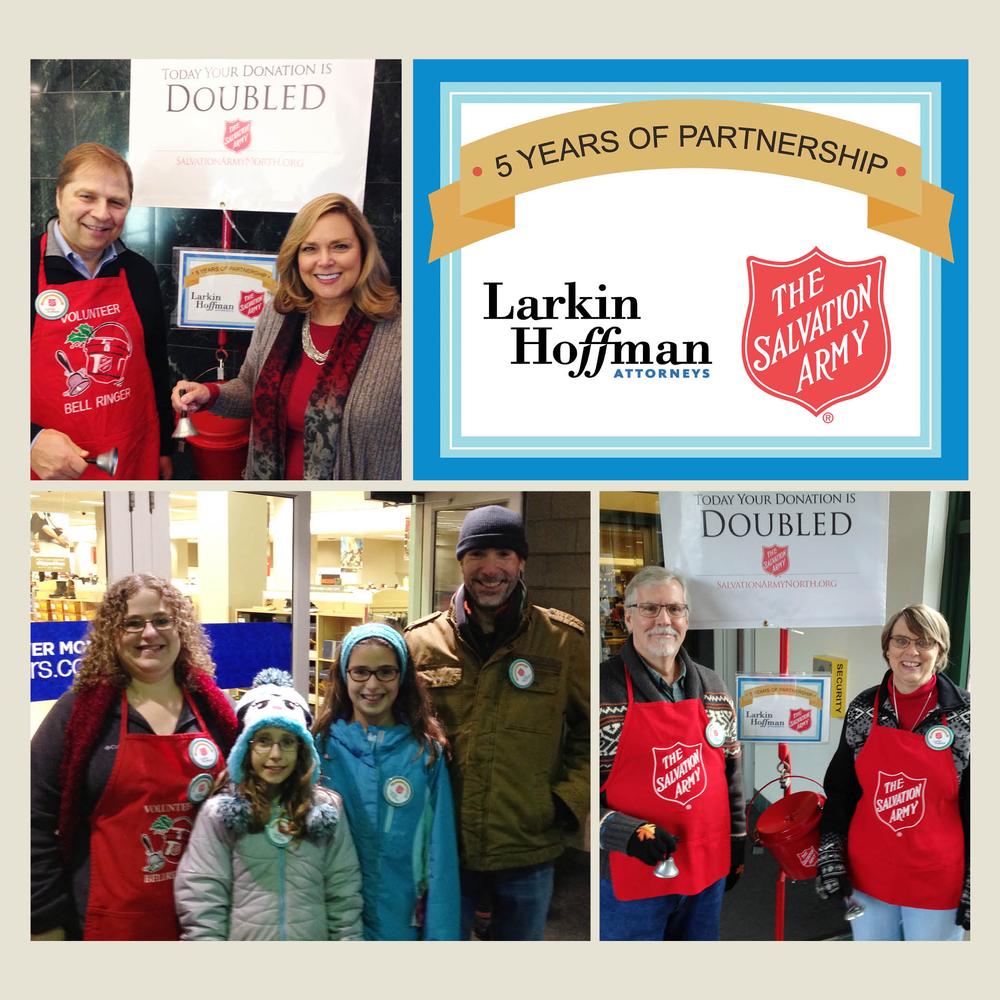 For the fifth consecutive year Larkin Hoffman employees partnered with the Salvation Army to raise nearly $5,400. More than 40 Larkin Hoffman volunteers and their families helped kick off the annual fundraiser by staffing red kettles located at Mall of America entrances on Saturday, Nov. 19.

“It is a source of pride throughout the firm that we can assist the Salvation Army in its fundraising efforts,” said Bill Griffith, president of Larkin Hoffman. “Bell ringing on kickoff day is an annual tradition that we will look forward to for many years to come.”

In five years of fundraising, Larkin Hoffman volunteers have brought in more than $25,000 during the Salvation Army’s red kettle kickoff day. The firm has also provided direct financial support to The Salvation Army over the course of the partnership.

"The Salvation Army is grateful for Larkin Hoffman's ongoing support of our red kettle kickoff," said Lt. Col. Lonneal Richardson, leader of The Salvation Army Northern Division." Your many hours of volunteering have brought in tens of thousands of dollars, and helped us bring the hope and joy of Christmas to people in need in our community.”

The Salvation Army’s bell-ringing season will run through the evening of December 24, 2016. One two-hour shift at a red kettle can raise enough money to provide a week’s worth of groceries for a family of four. To learn more information about The Salvation Army and the organization’s efforts, click here. 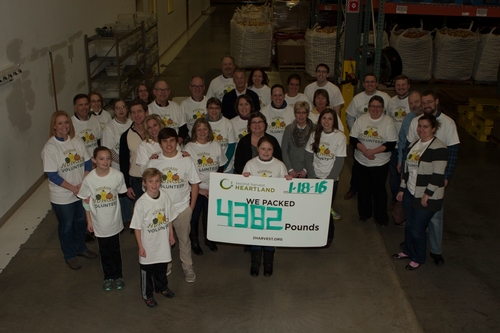 On January 18, 2016, Larkin Hoffman honored the life and legacy of Martin Luther King, Jr. ‎by partnering with Second Harvest Heartland in the fight to end hunger. Employees of the firm and ‎their families sorted and packed food at Second Harvest Heartland’s warehouse in Golden Valley, ‎Minnesota. “Larkin Hoffman has always had a strong commitment to give back to our community,” said Tamara O’Neill Moreland, chair of the firm’s Diversity Committee. "We are grateful to ‎be honoring Dr. King through service, which we believe is consistent with and furthers Dr. King’s vision.‎” Larkin Hoffman’s 32 volunteers helped pack 4,382 pounds of food. Their efforts helped to stock local food shelves that feed children, working adults and seniors who don’t have enough to eat. In addition, several of the firm’s employees made financial donations to Second Harvest Heartland. Second Harvest Heartland is one of the nation’s largest food banks delivering more than 74 million meals a year to nearly 1,000 food shelves, pantries and other programs in Minnesota and western Wisconsin. The organization helps relieve hunger not only by sourcing, warehousing and distributing food, but through data-driven thought leadership and community partnerships that help improve the region’s larger hunger relief system. Larkin Hoffman is truly proud to partner with them for our Martin Luther King Jr. Day of Service. 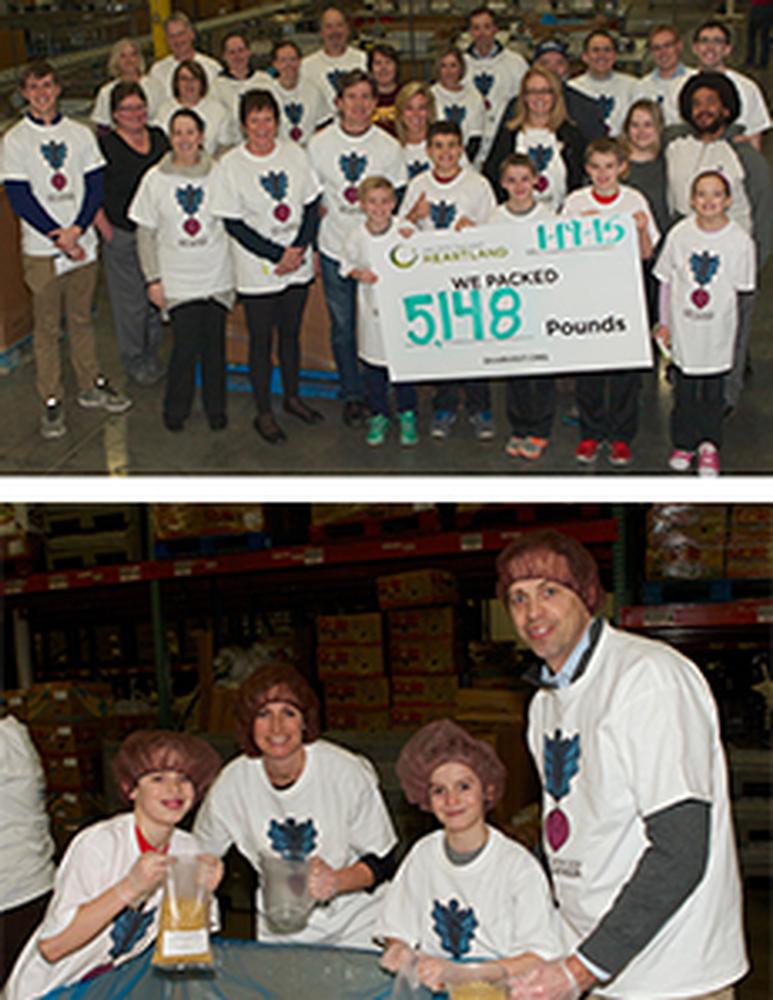 In recognition of Martin Luther King Jr. Day, Larkin Hoffman employees, friends and family members spent the day sorting and packing food to help fight hunger in Minnesota and throughout the upper Midwest.

The 33 volunteers helped pack 5,148 pounds of food at Second Harvest Heartland’s  warehouse in Golden Valley, Minnesota. Their efforts will help stock local food shelves that feed children, working adults and seniors who don’t have enough to eat. In addition, several of the firm’s employees made financial donations to Second Harvest Heartland.

“Larkin Hoffman has always had a strong commitment to give back to our community,” said Tamara O’Neill Moreland, chair of the firm’s Diversity Committee. “We are grateful to ‎be honoring Dr. King through service, which we believe is consistent with and furthers Dr. King’s vision.‎”

Four Larkin Hoffman employees, dressed as Wizard of Oz® characters, raced in Bridging Inc.’s 16th Annual Subway® Bed Race for Bridging event, where teams of four raced down a steep, snowy hill – despite sub-zero temperatures – on queen-sized mattresses, often dressed in themed costumes.  Larkin Hoffman was a title sponsor for the event on March 1, 2014 and made it to the third round. Hundreds of teams participated in this year’s event, with proceeds benefiting Bridging Inc., a nonprofit organization located in Bloomington, Minnesota that donates furniture and household items to needy families. Bridging is the largest furniture bank in North America.