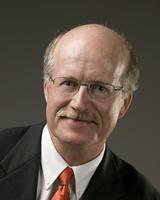 Dick Knutson, Larkin Hoffman’s longtime chief operating officer, has been named the National Multiple Sclerosis Society’s National Volunteer of the Year for his leadership, passion and commitment to advancing the movement to create a world free of MS and address the challenges of those affected by the disease. Dick accepted the organization’s most prestigious honor Friday, November 8, at the National MS Society Leadership Conference in Denver.

Knutson has been a dedicated leader with the Society, contributing across all levels of the organization, including serving more than 17 years on the Upper Midwest Chapter Board of Trustees and on the National Board of Directors since 2008.

“Over the last two decades, Dick Knutson has been an invaluable leader in the movement to create a world free of MS — demonstrating profound dedication and passion and always keeping people with MS at the center of everything he does,” said Holly Anderson, president of the National MS Society, Upper Midwest Chapter. “He has made an indelible mark on the lives of families living with this disease and his extraordinary commitment is nothing short of inspiring.”

At the chapter level, Dick has filled many significant roles, including board chair, treasurer, governance committee chair and finance committee chair, and he currently serves on the executive, finance and audit committees. In addition to his service on the National Board of Directors, Dick serves on the national chapter relations, finance, and insurance committees. He provides on-the-ground support throughout the year at local events and programs and is a strong advocate for those touched by the disease. An ardent supporter of independent living, Dick played a critical role in the development of Minneapolis’s Kingsley Commons in 2007 — one of the nation's first apartment buildings designed to provide accessible, affordable housing to people with MS.

Larkin Hoffman has a long tradition of giving back to the community,” said Bill Griffith, president of the firm. “Dick has been a tireless advocate for the MS Society and has supported our efforts to organize giving campaigns, sponsorships and teams of employees, friends and clients to ride in the MS 150 Bike events.” 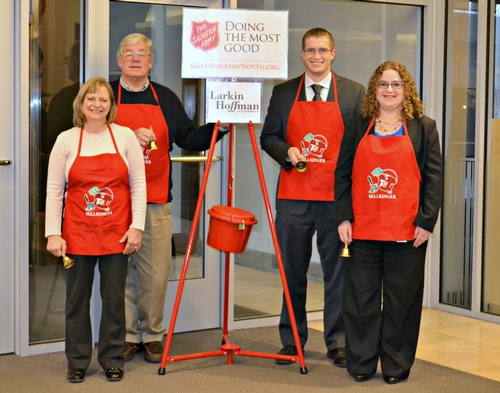 Larkin Hoffman will help The Salvation Army commence its 2013 bell-ringing season at the Mall of America this Saturday, November 9, as part of the city-wide Rock the Red Kettle kick-off event.

April 17, 2013
Larkin Hoffman will sponsor Gillette Children’s Specialty Healthcare’s second annual Laugh Out Loud Twin Cities. The fundraising event will be held at the Radisson Blu at Mall of America on September 28, 2013 and will feature a national comedy act. The firm has been a proud supporter of Gillette Children's Specialty Healthcare and its mission to "Cure Pity" for nearly 20 years.

Larkin Hoffman participated in the annual Subway Bed Race for Bridging on March 2, 2013. Four team members raced down a snowy hill on a "bed" to help support Bridging, a Bloomington-based charity which donates furniture and household items to families in transition.

Vinland National Center was established in 1976 as a facility to exclusively help individuals who have physical and developmental disabilities. Today, Vinland provides chemical health, mental health, supportive housing and vocational services to men and women at their facility in Loretto, Minnesota. Vinland focuses on treating these individuals holistically, addressing the mind, body and spirit.

Larkin Hoffman has provided legislative support for Vinland for over 25 years. Jerry Seck has been on the Board of Directors during this time and continues to guide Vinland through its recent growth and expansion.

December 8, 2012
Larkin Hoffman was a sponsor and Power Hour volunteer for the 14th Annual KS95 Radiothon on December 6-7, 2012. The Radiothon benefitted Gillette Children's Specialty Healthcare and raised $514,000 to help Gillette continue their mission to Cure Pity and help improve the care children receive at the nationally recognized institution.

Visit the Gillette Children's Specialty Healthcare website to learn more about the organization.
Showing Results 19 - 24 of 28
Back to Top